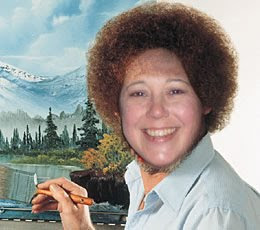 Last week and I messed up an order that I was making which at the time totally cheesed me off. Like an adult I totally had a tantrum and chucked the feather base onto a shelf, screamed then started over.

After a calming girls weekend away, I entered my craft room last night with a new perspective. "What would Bob Ross do?"

As a child I would love to watch his show on PBS and to this day I think he is part of the reason I even attended art school. Bob Ross never threw a tantrum. No, even though his Jordache Jeans were so tight he probably lost circulation in his manly areas and even though he painted the same landscape for 20 years (just with in different seasons), he would never let a mishap get him down. Hell no, he would have had a "Happy Accident."

So with a new lease on my mishap I busted out the Jordache Jeans, teased my hair into a fro and got to work. I have decided to share my "Happy Accident" below: 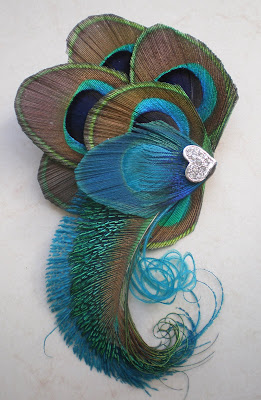 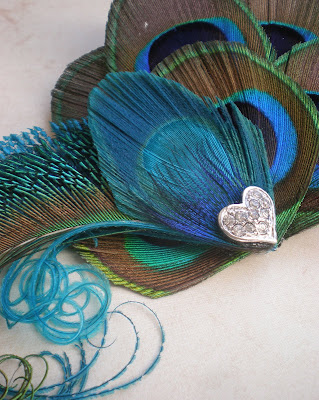 Popular posts from this blog

December 29, 2011
In October I posted a tutorial to make leather earrings . Well for Christmas I revisited this craft and made a few other designs for a few people at my work. This is one of my favorite tutorials because they are so easy to make and the earrings are light and easy to wear. I liked the new designs so much I thought I would share the pattern for them. To view the full set of instructions on how to make these leather earrings, click here . To make one of the two pairs shown, download and print the updated pattern below (the bottom row are the new designs):
18 comments
Read more

October 03, 2011
Why should leather only be used for jackets, shoes and purses? Medium weight or upholstery leather is easy to craft since it doesn't fray or crinkle. These leather earrings are quick, versatile and easy to make. You can even recycle those old purses or jackets that have damage since you really only need small amounts of good leather. I used 4" square leather samples and had plenty left over to make more earrings. Supplies: Leather Leather punch (I bought mine at Michaels Craft store for around $10 but you can also get the from home stores like Home Depot or Lowes) Sharp scissors 2-Large Jump Rings 2-Earring wires Jewelry pliers Download the pattern below, print and cut out shapes. Cut 2-of each shape in the leather of your choice. I used 3 different types of leather, don't be afraid to mix it up. Pile one set of the three shapes on top of each other and carefully punch a whole on one of the ends. I punched the hole about a quarter of an inch away from the end usin
83 comments
Read more

April 01, 2011
Every time I buy furniture that requires assembly I always left over hardware. I take this hardware and put it in a jar thinking that one day I will need that extra nut or bolt. Well today is that day! Below is a tutorial on how to take those extra washers and make them into a cute necklace. Supplies: Scissors X-acto knife or hole punch Pencil Small piece of scrapbooking paper (you can use the left over scraps for this project) Modge Podge (or something similar) Washer Aleene’s Paper Glaze 36” of ribbon or cord Use the washer to trace a circle on the paper, don’t forget to trace the inside circle as well. Using your scissors cut just inside of the traced line on the outer circle. Note: you want to cut inside of the line and not on it so it fits on the washer and does not overlap the edges. If the hole for your center is close to the same size of a hole punch, simply punch out the center circle. If not use the X-acto knife to cut out the center area. Modge Podge the paper to the
8 comments
Read more